How The Brisbane Property Boom Has Affected The Unit Market

For a while there, the mere thought of buying a unit in Brisbane’s inner-city suburbs was a bit fraught with downsides.

A construction boom saw a flood of the new stock hit the market.

A lot of it was really quality stuff – boutique developments with vibrant lifestyle components and exclusive features boasting spacious and considered residences.

Some of it was… not great. Cheaply made, quickly thrown together, closed off from the outside world with no street appeal and a bit of a concrete ghetto vibe.

Hundreds of apartments came online just as buyer demand nosedived thanks to economic jitters and a severe tightening of lending restrictions, particularly on investor loans and for first home buyers, who are the two groups who tend to favour brand-new units.

There was a glut in Brisbane, and prices slid, as did weekly rents thanks to increasing vacancy rates.

Suddenly, if you were in the market for a new home, your first place, or an investment property, you’d consider just about anything else before a unit in the inner-city.

Those days now look to be firmly behind us, with a rise in demand and strengthening of demand.

What’s driving the return to glory?

Well, for starters, that stock oversupply has worked its way through, and the scales have been back in balance for a little while now.

When lending conditions improved, savvy investors took the opportunity to jump on a vacant stock that was discounted by developers eager to get it off their books.

There were some incredible deals done a little while back, and some lucky landlords locked in unbelievable yields.

Similarly, first home buyers on a budget were able to take their time, not rush a decision, and carefully choose from an assortment of units in good areas that were suddenly in their price range.

The oversupply saw developers shift focus and hit pause on upcoming projects in the CBD and surrounds, giving things time to cool down.

Then, when the coronavirus pandemic hit, many projects in the pipeline were shelved indefinitely thanks to growing uncertainty.

All of those things combined to soak up the glut of units. Supply and demand equalised at the start of the year, just as a feverish momentum hit southeast Queensland.

A market boom is now well and truly underway in Brisbane. After several pretty underwhelming years across the board, buyers are out in force.

They’re snapping up an array of quality dwellings under pretty competitive conditions, putting sharp upward pressure on dwelling prices, which are now up 13 per cent over the past 12 months.

Units are no exception, with buyers flocking back to apartments living in the inner-city – and it’s not a huge surprise when you think about it.

Unit prices on the up and up

Brisbane’s median unit prices have experienced successive monthly gains since November last year, with values up 5.7 per cent over the past 12 months. 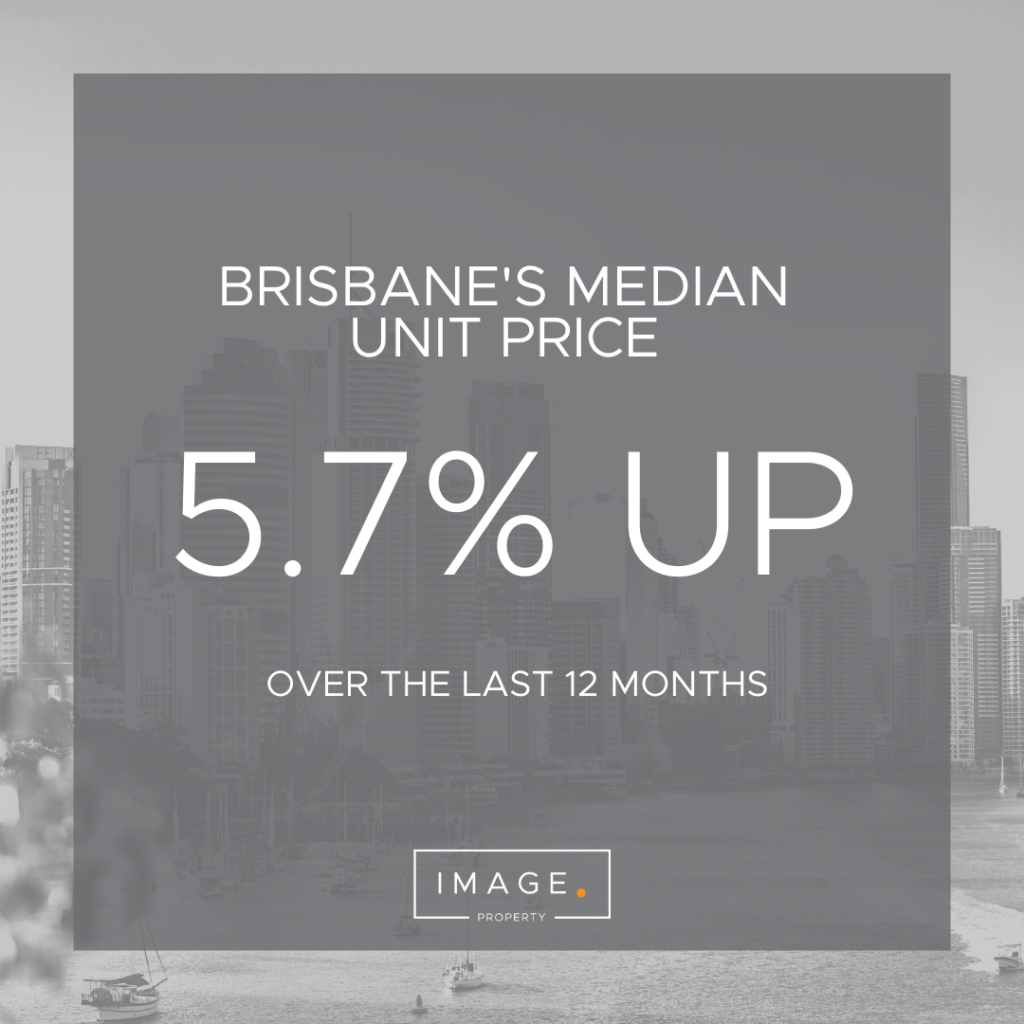 In the inner-city, these unit developments are in prime suburbs like Newstead, New Farm, Teneriffe, Bowen Hills, around the RNA precinct, in South Brisbane, Highgate Hill, Woolloongabba and West End. They are for the young, the young at heart, and the hip that wants to spend their time.

These locations are right in the thick of it, with a plethora of trendy cafes, restaurants, bars, and pubs, as well as specialty shopping, lifestyle amenities and entertainment offerings.

You’re never short of something to do here. The vibe is energising. Being here is fun.

They’re also areas that are close to where that young professional demographic works. It makes life easier being near work, removing the need for a lengthy or expensive commute.

So, living here is a pretty enjoyable thought.

As I mentioned, many of these recently completed developments are ultra-cool.

Developers brought a bit of a foreign flavour to the design, with New York-style rooftop pools and entertaining community spaces, with expansive vistas across the city amid shared barbeque and lounging amenities.

They have European-style gyms, spa and sauna spaces that feel more like a five-star hotel than a unit block’s common area.

Furnishings are chic. The layout of apartments is modern and thoughtful, allowing for flexible living that can move and grow with its inhabitants.

Many have village-style retail precincts at their base, with a selection of shops and eateries that locals and visitors alike can enjoy.

For a number of buyers in Brisbane, apartments in the inner-city tick a lot of boxes. They represent an affordable but quality, buy into high growth areas – with a range of lifestyle benefits to boot.

Interest Rate rises in 2022: Is it time to review your loan?