We’re a few weeks into spring, and already it’s clear the winter months are well behind us with the traditional selling season well underway.

Across the country, CoreLogic estimates there were almost 600,000 house and unit sales for the year ending August 2021. This is the highest number of annual sales since 2004, and a 42 per cent lift on the annual number of sales over the previous 12-month period. 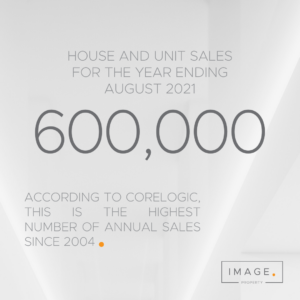 Nationally, the number of dwellings sold over the past year was 31 per cent above the decade average and 24 per cent higher than the 20-year average.

And it seems these figures herald only good news for the Sunshine State.

Across Queensland, turnover was the highest in many years, with about 6.8 per cent of properties changing hands over the year to August – the strongest level since way back in 2008.

CoreLogic data also shows this high rate of turnover has been bolstered by a surge in interstate migration along with our relatively affordable housing prices compared to New South Wales and Victoria in particular.

Australian Bureau of Statistics likewise data shows Brisbane’s population grew by 1.9 per cent during 2019-2020 – recording the highest growth rate of all capital cities over the period.

Brisbane’s median house price sits at $691,000, according to the latest data for August, and the median unit price in Brisbane is now selling for $425,000.

And due to this buyer frenzy, as we head into spring, an increase in fresh listings is a welcome relief for prospective buyers, but the additional supply is not dampening sale prices.

In fact, at the moment, selling conditions are definitely skewed towards vendors in a big way, meaning it’s a great time to bring your property to market.

Plus, forecasters expect southeast Queensland property prices to keep rising well into next year and possibly beyond.

The Reserve Bank remains committed to keeping interest rates low for the next few years, which means that buyer demand is not likely to wane significantly anytime soon.

Month on month, we see strong sale prices for all dwelling types across the southeast as buyers compete with each other to secure their own slice of Sunshine State real estate.

Plus, there doesn’t appear to be any headwinds on the horizon to dampen this extremely positive market sentiment – which is great news for anyone involved in the real estate sector.