By Adam Empringham, Image Property
It’s been a long time between property drinks, hasn’t it?

What I’m talking about is that Brisbane has just become the top-performing house market in the nation, according to the latest CoreLogic data.

The CoreLogic Home Value Index for October found that Brisbane had recorded the strongest dwelling value growth of 2.54 per cent over the past month and was neck and neck with Hobart for the best results over the past quarter, too! 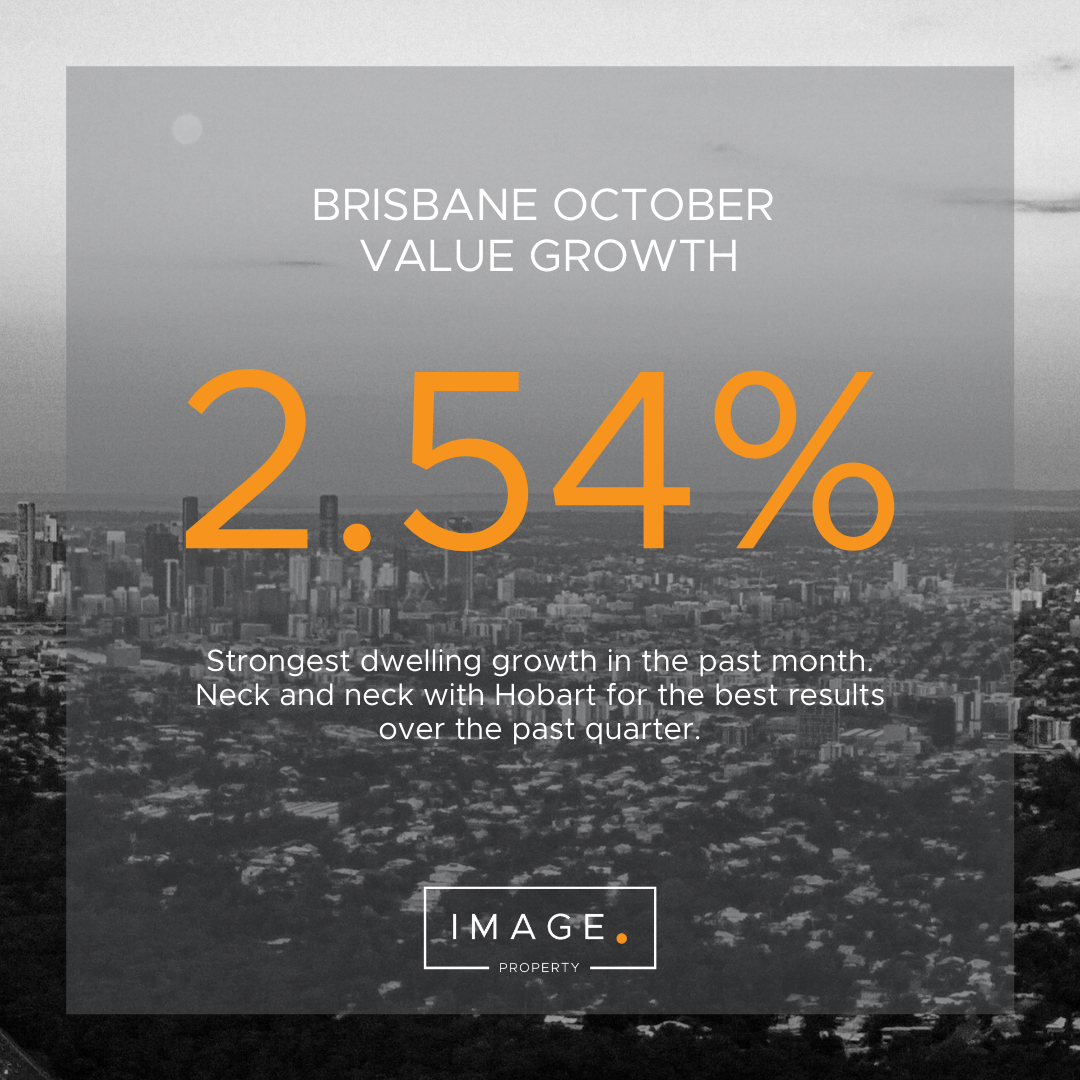 Brisbane’s median unit value also increased by 3.3 per cent over the past quarter to be in the middle of the pack and with plenty of room left to grow because of its affordability. Indeed, the median unit value has increased nearly 10 per cent since the start of this year alone.

Why has this happened?

Brisbane’s property market has been strengthening since about October last year, with prices continuing to escalate every month since.

However, there are some cities, such as Sydney, Melbourne, Darwin, and Perth, where prices seem to be already running out of steam.

Indeed, CoreLogic has indicated that the peak of the national market was actually back in March.

In Darwin and Perth, the median house value reduced by 0.2 per cent and 0.1 per cent, respectively.

Of course, compared to most other capital cities, Brisbane’s affordability had already started to draw in homebuyers and investors before the pandemic.

Over the past year and a half, we have also seen a significant uplift in the numbers of interstate migrants heading north to the Sunshine State to take advantage of this, but also for the myriad lifestyle attributes that our state has to offer.

How long will it last?

With house prices generally now about 25 per cent higher than they were just a year ago in Brisbane and across the southeast, and with borders now reopening, the million-dollar question is how long will these good times last?

Of course, no one truly knows the answer to that, but we are set to shine for longer than most other locations, in my opinion.

There are a number of reasons for this assessment, including the affordability as mentioned earlier, which still remains our calling card even after the recent price growth.

On top of that, we have billions of dollars of major infrastructure projects underway that we’re always going to be a positive for our region’s economy and liveability.

Likewise, we are seeing record numbers of interstate migrants selling their more expensive properties in southern states and recycling some of those funds into property up here – with some leftover, too.

There is no question that this “new money” puts upward pressure on property prices here and will continue to do so for some time.

Forecasts are currently being released about where prices might be headed in the years ahead, and while no one should put too much credence in these (remember those 30 per cent price falls that were predicted last year?), Brisbane is uniformly leading the pack.

In fact, according to Westpac, after this year’s spectacular property price growth is over, we are set to record double-digit increases next year, too.

Meaning that anyone who was looking back at Brisbane property prices in a year or two –who waited on the sidelines before buying, selling, upgrading, or downsizing – will likely be a tad annoyed at their indecision.